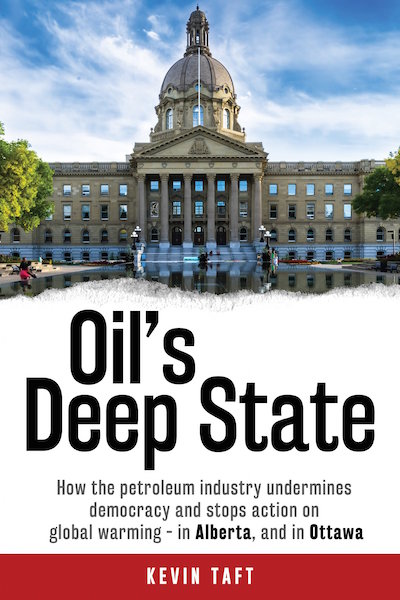 Why have democratic governments failed to take serious steps to reduce carbon emissions despite dire warnings and compelling evidence of the profound and growing threat posed by global warming?

Most of the writing on global warming is by scientists, academics, environmentalists and journalists. Kevin Taft brings a fresh perspective through the insight he gained as an elected politician who had an insider’s eyewitness view of the role of the oil industry in Alberta. His answer, in brief: the oil industry has captured most key democratic institutions in the province, and many at the federal level as well.

Taft views global warming and weakened democracy as two symptoms of the same problem—the loss of democratic institutions to corporate influence and control. He sees citizen engagement and direct action by the public as the only response that can unravel big oil’s deep state, in Alberta and across Canada.

Kevin Taft was a Member of the Legislative Assembly of Alberta with the Alberta Liberal Party from 2001 to 2012, and Leader of the Opposition from 2004 to 2008. He holds a PhD in Business and has extensive public policy experience in the government, private, and non-profit sectors, particularly in health, energy, and economic policy. Taft has written four best-selling books, including Shredding the Public Interest, which has been called “a seminal text in the history of critical thought in Alberta.” He lives in Edmonton.

“Kevin Taft’s powerful book is compelling because it is drawn from his personal experience as a politician [. . .] Read this book, get mad, then take action to restore democracy.” – David Suzuki

“Taft delivers a gripping read for anyone who wonders why, despite a broad consensus for ambitious action in the face of the climate crisis, our country is hurtling in the wrong direction.” – Avi Lewis, journalist and filmmaker

“Taft’s book is a must for voting-age Canadians who smugly believe that the political idiocy unfolding in the USA can’t happen in Canada.” – David Schindler, environmental scientist

“Kevin Taft, the ultimate insider / outsider, deftly peels back the cover over what Big Oil doesn’t want you to see.” – Gordon Laxer, author and director of Parkland Institute

“..a must read for anyone who wants to save democracy and the planet at the same time.” – Gillian Steward, Toronto Star columnist

Oil's Deep State will be available for sale at this event.