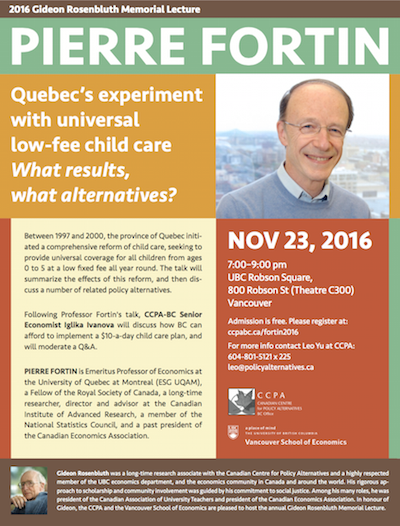 The CCPA-BC is proud to present, in partnership with UBC's Vancouver School of Economics, the 2016 Gideon Rosenbluth Memorial Lecture. Economist Pierre Fortin will present "Quebec’s experiment with universal low-fee child care: what results, what alternatives?"

Between 1997 and 2000, the province of Quebec initiated a comprehensive reform of child care, seeking to provide universal coverage for all children from ages 0 to 5 at a low fixed fee all year round. The lecture will summarize the effects of this reform on child care use, maternal labour force participation, government budget balances, and children’s development based on evidence gathered from the research literature. Fortin will then discuss a number of related policy alternatives—applicable to many provinces, including BC—universal versus targeting programs, non-profit versus for-profit care providers, informal versus centre-based services, and child care subsidies versus straight child benefits. The amendments to the Quebec program introduced in 2015 will be appraised in the light of this discussion.

Following Professor Fortin's talk, CCPA-BC Senior Economist Iglika Ivanova will discuss how BC can afford to implement a $10-a-day child care plan, and will moderate a Q&A.

Pierre Fortin is Emeritus Professor of Economics at the University of Quebec at Montreal (ESG UQAM), a Fellow of the Royal Society of Canada, a longtime researcher, director and advisor at the Canadian Institute of Advanced Research, a member of the National Statistics Council, and a past president of the Canadian Economics Association. He has published widely in Canada and abroad, mainly in the areas of economic growth and fluctuations, labour markets, and monetary, fiscal and social policies. He has been a member of the Economic Advisory Panel to the Minister of Finance of Canada and of the Economic Council of Canada, and chief economic adviser to a Quebec Premier. He has chaired government task forces on business investment, income security and agriculture, and served as director of Camoplast Inc., a manufacturing company in Sherbrooke, Quebec.

About Gideon Rosenbluth: Gideon Rosenbluth was a long-time research associate with the Canadian Centre for Policy Alternatives and a highly respected member of the UBC economics department, and the economics community in Canada and around the world. His rigorous approach to scholarship and community involvement was guided by his commitment to social justice. Among his many roles, he was president of the Canadian Association of University Teachers and president of the Canadian Economics Association. In honour of Gideon, CCPA and the Vancouver School of Economics are pleased to host the annual Gideon Rosenbluth Memorial Lecture.