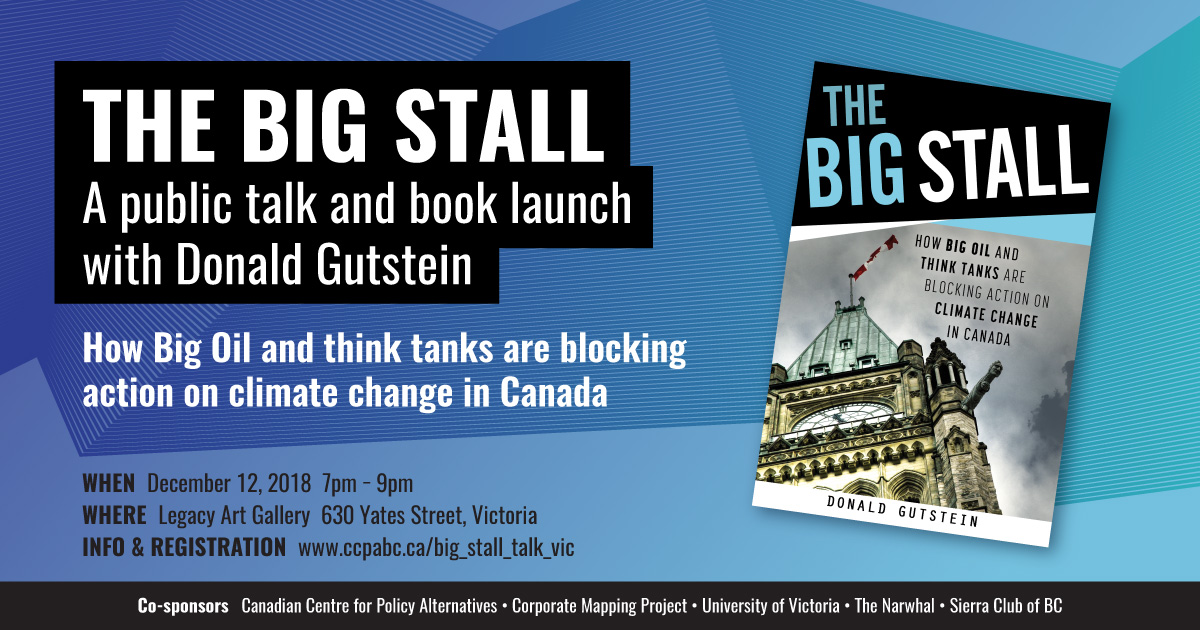 The Big Stall: How Big Oil and think tanks are blocking action on climate change in Canada - A free public talk and book launch with Donald Gutstein

In fall 2015, the newly elected Trudeau government endorsed the Paris Agreement and promised to tackle global warming. In

2016, it released a major report which set out a national energy strategy embracing clean growth, technological innovation and carbon pricing. Rather than putting in place tough measures to achieve the Paris targets, however, the government reframed global warming as a market opportunity for Canada's clean technology sector.

The Big Stall traces the origins of the government's climate change plan back to the energy sector itself — in particular Big Oil. It shows how, in the last fifteen years, Big Oil has infiltrated provincial and federal governments, academia, media and the non-profit sector to sway government and public opinion on the realities of climate change and what needs to be done about it.

Working both behind the scenes and in high-profile networks, Canada's energy companies moved the debate away from discussion of the measures required to create a zero-carbon world and towards market-based solutions that will cut carbon dioxide emissions — but not enough to prevent severe climate impacts.

Join us in a talk with Donald Gutstein, Caitlyn Vernon (Sierra Club of BC) and William Carroll (Dept. of Sociology, University of Victoria; and Corporate Mapping Project Co-Director) about why the door has been left wide open for oil companies to determine their own futures in Canada, and to offer the background information citizens need to challenge politicians claiming they are taking meaningful action on global warming.

Copies of the book will be available for purchase at the talk.

DONALD GUTSTEIN is a former professor in the School of Communication at Simon Fraser University and co-director of NewsWatch Canada, a media-monitoring project at the school. He is also a research collaborator with the Corporate Mapping Project (www.corporatemapping.ca). He is the author of Harperism: How Stephen Harper and his think tank colleagues have transformed Canada as well as four other books on the links between large corporations, politics and the media.

This event is sponsored by: Canadian Centre for Policy Alternatives (BC Office), Corporate Mapping Project, University of Victoria, Sierra Club of BC, and The Narwhal